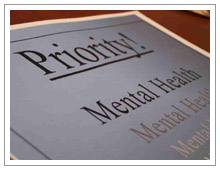 At View Heights Convalescent Hospital, our Inter-Disciplinary Treatment Team (IDT) works to stabilize our client’s moods and behaviors with the goal of returning them to the community.  Below is a brief description of mental health conditions treated at our facility.

In the United States mental health conditions affect millions of people. It is estimated that 26.2% of Americans ages 18 and older—about one in four adults—suffer from a diagnosable mental disorder in a given year.

Schizophrenia is a brain disorder that affects millions of men and women. The medical community, at this time, doesn’t specifically know what causes schizophrenia except that it is a combination of genetic and environmental factors.  Schizophrenia affects men, women and all ethnic groups and the symptoms vary from person to person.

Psychiatrists believe that schizophrenia may be caused by a chemical mix-up or imbalance in the brain.  This imbalance causes the brain to send out scrambled messages.

At View Heights Convalescent Hospital, our Inter-Disciplinary Treatment Team (IDT) works to stabilize the acute symptoms that a schizophrenic may be experiencing.  Typically these symptoms include:

Coping with schizophrenics can be challenging, as they often stop taking their medications, which causes the acute symptoms to surface and affect their ability to live a “normal” life.  While there is no cure for schizophrenia, advances in medication have helped people manage their symptoms and successfully live in the community.

During the Care Plan Conference, our IDT treatment team works closely, together with the individual, their family member or conservators, and oversight agencies to formulate a comprehensive assessment and plan of intervention with the goal of returning the individual to a community-based setting.

Bipolar Disorder, also known as manic-depressive illness, is a brain disorder that causes swings from depressed to manic moods and behaviors and back again. The nature and intensity of the swings vary greatly between individuals. Swings can occur very rapidly and frequently, sometimes in one day, or they can occur much more slowly over several months.  Some people experience mild depression and a moderate elevation in mood while others experience extreme depression and frantic excitement and energy.

Bipolar Disorder behaviors affect everyone, the family, friends and co-workers as well as the person with the disorder.  Bipolar behaviors are not the normal ups and downs we all experience, but they are still very difficult to identify and very disruptive to everyone.  Alcohol, drug addictions, and other physical conditions or diseases often occur with bipolar disorder making the diagnosis and treatment much more difficult.  Bipolar Disorder takes professionals to diagnose and life-long medication and therapy to treat.

Bipolar Disorder often starts in the late teens or early adulthood.  Serious, often life threatening, consequences result from the behavioral swings. Depression periods can occur without any obvious triggering life event, and they have the potential to lead to suicide.  Elevated moods or manic behaviors can also occur unrelated to any other event.  Manic behaviors include uncontrollable spending, gambling, talking, shopping or other frenetic activity while not sleeping and being disconnected to surroundings.  Acute episodes very often result in a crisis causing hospitalization or incarceration.

Anxiety disorders are described as excessive and abnormal fear, worry and anxiety. In a survey published in the Archives of General Psychology, it was estimated that as many as 18% of American adults suffer from at least one anxiety disorder.

There are many types of anxiety disorders include; panic disorder, post traumatic stress disorder (PTSD), phobias and society anxiety.

In 1980, PTSD was recognized as a disorder with specific symptoms that could be reliably diagnosed and was added to the American Psychiatric Association’s Diagnostic and Statistical Manual of Mental Disorders. Specifically PTSD is:

These psychological disorders are those that involve cognitive abilities such as memory, problem solving and perception. Types of cognitive disorders include; delirium, dementia and amnesia.

Dissociative disorders are psychological disorders that involve a dissociation or interruption in aspects of consciousness, including identity and memory. (Please be advised that our facility does not provide services for clients diagnosed with Alzheimers or dementia.)